I spent most of Thursday September 20th close to home, checking the river every five minutes, checking the online river forecast about once an hour, moving things off the 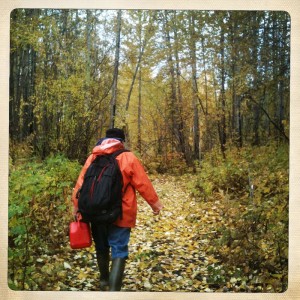 Hauling gas to the wheeler on the other side of the bridge. ( photo taken by Elf on another occasion)

ground, and generally looking around and asking myself “what if”? I moved a few of the dogs back from the river bank into the woods. The wheeler was already parked on the far side of the tracks, as the water under the bridge was too deep to drive it through. I carried some gas out to fill its tank. There were a few things I was worried about, but couldn’t do much about. The snowmachine. The dog houses ( which are plastic drums and would float). The firewood I had spent the last three months accumulating to avoid a repeat of last winter. And the newly purchased pile of metal roofing! All of this stuff I would have liked to move to higher ground. Except they were already on the highest ground I have. It would have to be enough.

In the afternoon I made a quick trip to town and got some work done, but I didn’t want to be gone long, and soon headed back across the river in the ceaseless pouring rain. Darkness came without the river rising a whole lot more. ?I went to bed, slept poorly and awoke often to walk down and check the river level by flashlight.??The forecast was for actual sunshine on Friday,?maybe this was as bad as it was gonna get. Not.

Sometime in the small hours of the dark I fell into a deeper sleep to the sound of crashing logs, and awoke to pre-dawn light. The river could once again be seen as well as heard. And it was up. Way up. The water was over the lower bank and onto the first bench, charging through the trees. Massive logs sailed by like runaway trains and piled into the logjam, which had doubled in size. I moved the rest of the dogs away from the bank. At some point I noticed the sun was shining. This was bizarre. Not only had we not seen it for months, but it shows up NOW, in the middle of this huge flood, like some kind of weird eye-of-the-hurricane thing. Took pictures: 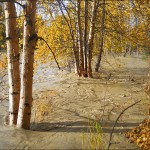 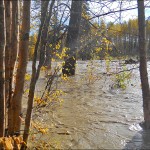 The river spreading out overland.

Looking out what is normally the wheeler trail towards the bridge. Photo by Elf.

Around ten A.M. I realized I had made a strategic error. On my short trip to town Thursday, I had been in too much of a hurry and had not charged up the reserve batteries for my phone. Now I was running out of juice. Under the circumstances. I didn’t like the prospect of being out there without a communication link. ?I decided I would make the shortest trip I could into town, charge up, and head right back.

When I got to the bridge I discovered that the entire Chase trail southbound was about two feet underwater. The only way left to get to town was on the elevated railroad embankment, on foot. I started walking down the tracks. About halfway to town my phone rang. It was Steve Durr, asking if I had heard the news: There was a three foot “wall” of water due in an hour, and Talkeetna was being evacuated. I turned around and started walking back towards the cabin. Then I remembered that Steve had a generator. I called him back and asked if I could use it. Yes, and would I also grab a couple of valuables out of his tent as well? Yes, I would.

On the last gasp of my phone, I called for reinforcements. Annie was 115 miles away in Anchorage, having just arrived at work. I quickly described the scenario, expecting the phone to die any second. Would she come up? ?Yes. ?She was on the road in about 5 minutes. I pocketed the now dead phone, and started thinking about how I was going to get to that generator, and get it home.