In our previous episode, Josh was trying to plan how to get the generator…

Although Steve’s camp was only about a quarter mile down the slough, it was going to be a challenge. I could get there by river – in about 5 seconds! – but there was no way I was getting a canoe back up against that current. With the water well into the woods, lining the boat upstream by rope would be very difficult as well. On the other hand, travel overland required crossing three chunks of water – normally dry channels flowing into the main channel like side streets – and the railroad grade and tracks. Luckily I am addicted to canoes, of which I had four on hand of my total nine. Here is what I did: 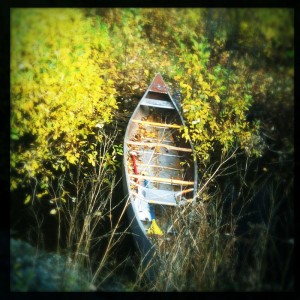 Canoe Two, waiting at the tracks. Photo by Elf.

First task: stage canoes for return. I took two canoes from the cabin and used them to cross the first flooded swale between my cabin and the tracks, which I could still walk across, but was an inch from my boot tops and rising, and I’d be carrying a heavy load coming back. I left one tied there as a ferry and took the second one to the railroad embankment. The drainage ditch there is usually only about five feet across and a foot deep, but on this day it was about ten feet across, six feet deep. I staged the second canoe there, more like a bridge than a ferry.

View from the cockpit on launching Canoe Three.

Returning to the cabin, I re-crossed the swale with Canoe One, but played out a rope as I went, so I would be able to retrieve it from the other side. Then I launched Canoe Three into the river in front of the cabin, or actually what would normally have been the game trail along the bank through the woods, and was now whitewater. Dodging birch trees at video game speed, I sailed downstream to the bridge, which by now required ducking to get under it in the canoe. The third flooded channel was the one that came out just above Steve’s camp, separating the camp from the trail out to the tracks, and my place. I ran the canoe up this channel and arrived at my destination.

Steve had said the generator was stashed in a tree, but I found it had fallen to the ground, in danger from the rising water. I grabbed it, the gas can, and the other stuff Steve had requested and carried all that to the canoe ( Canoe Three, remember). Then I crossed to the tracks side of that slough, and walked out to the tracks. My wheeler was parked there already from two days earlier. I drove the wheeler back to Canoe Three, loaded all the swag onto the rear rack, and drove out to the tracks – leaving Canoe Three tied there to provide a ferry to Steve’s camp should either of us need it.

At the tracks, I parked the wheeler and lugged all the stuff up the embankment, across the tracks, and down the other side to where Canoe Two was waiting as a bridge across the ditch. Walking across Canoe Two, I portaged everything again, over to the swale near my cabin. There I reeled in Canoe One from the opposite side, and used it to carry it all across the final obstacle, and then a short carry to the cabin. At the cabin, I still had the fourth and final canoe tied to a tree by the door, should a quick getaway be needed. You just can’t have too many canoes. 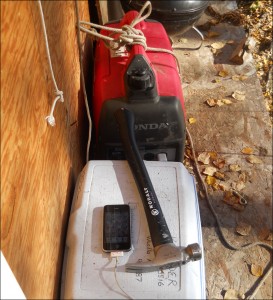 Success! My connection to the outside world re-established. When you have canoes, a hammer, and an iPhone, you’re gonna make it.

Now I had the generator, and hence telephone capacity. I had vessels staged to reach the tracks and the Chase trail, to go south to town, north to the hills, or to go back to Steve’s if needed. Two hours had passed since I got the call from Steve.

All I needed now was for the generator to start.