Things have been quiet in the Fuzzy Neighbors department for a while. But lately I have been gone a lot, and maybe they have forgotten I’m there. Also the fish are running, so it could be that. Fresh bear poo on the trail last week, then this week… 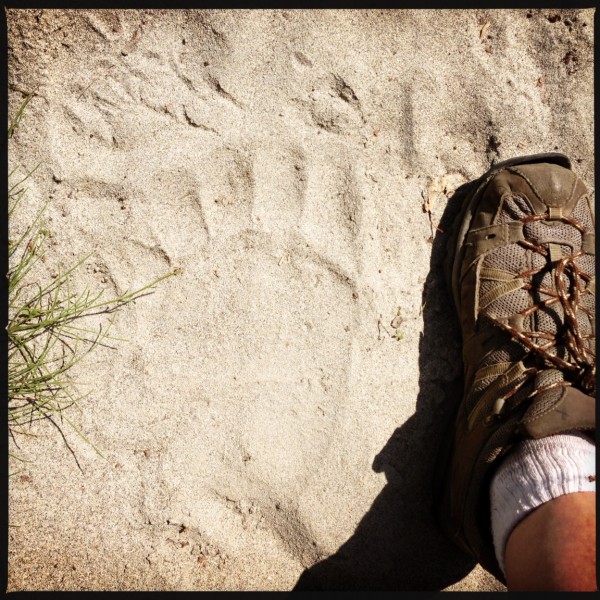 Big Fuzzy Neighbor left this track about 50 feet from my front door. When Elf took the photo, indications were that BFN had only vacated the track a few moments earlier.

Always nice to have a reminder not to take one’s surroundings for granted! 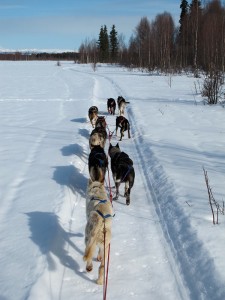 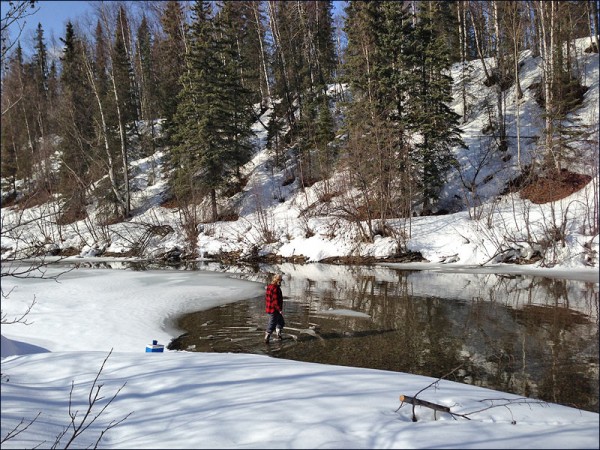 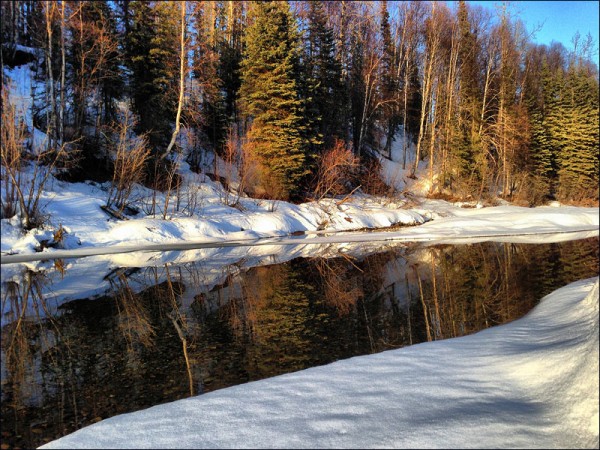 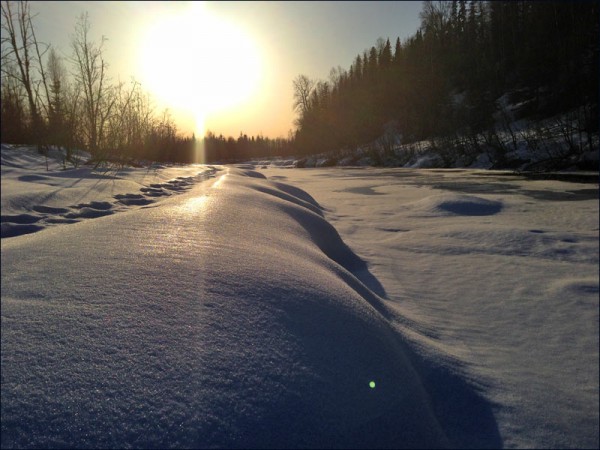 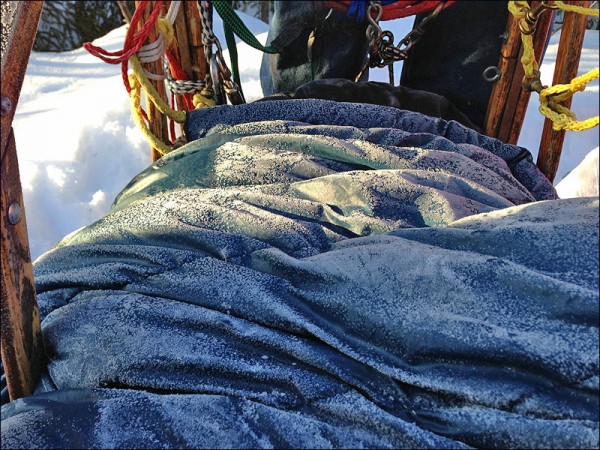 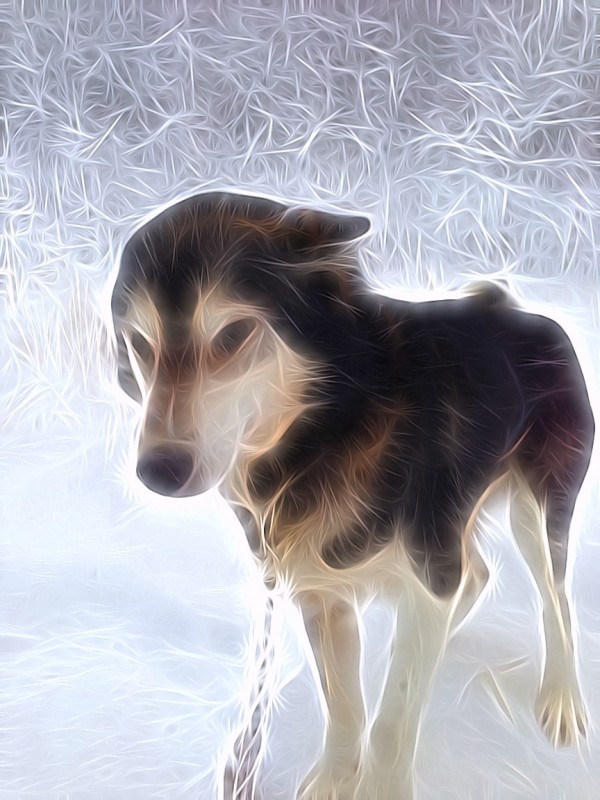 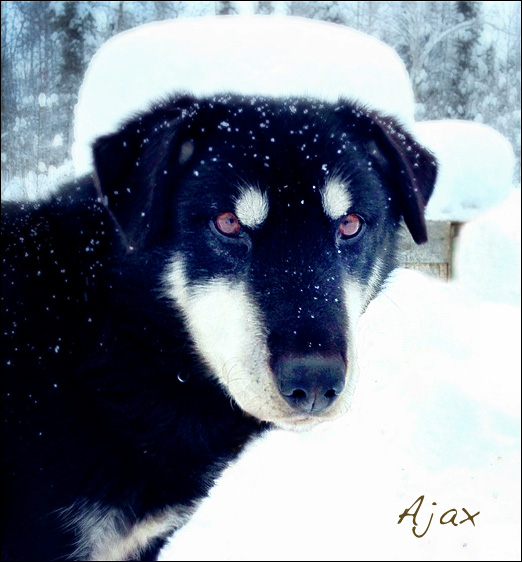 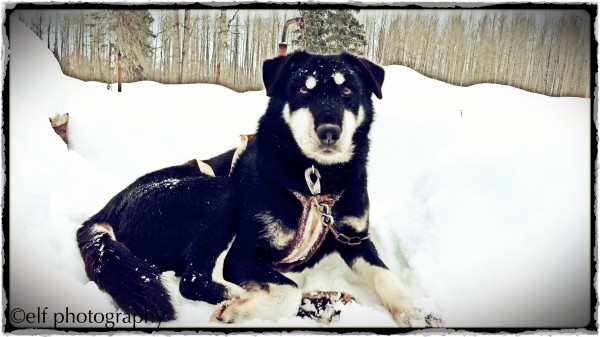 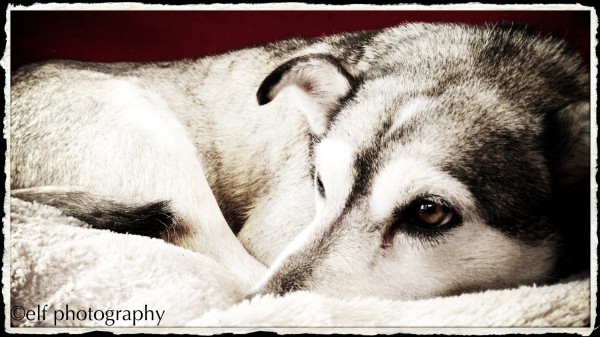 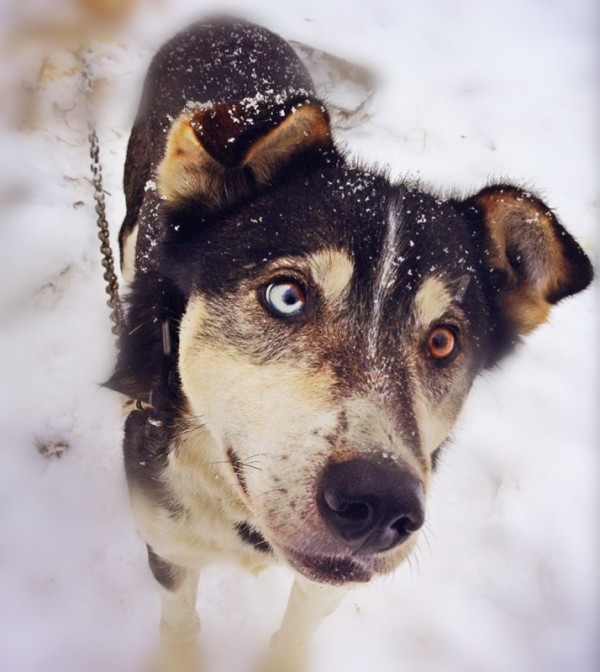 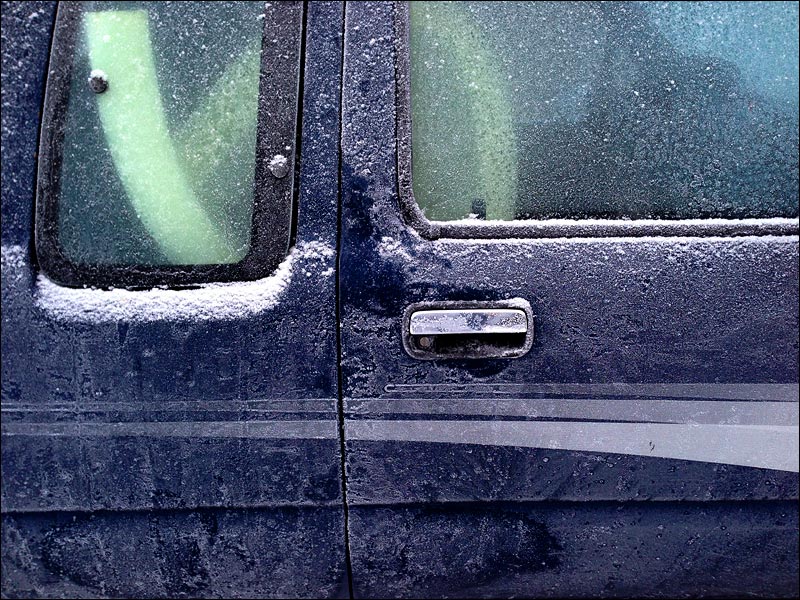 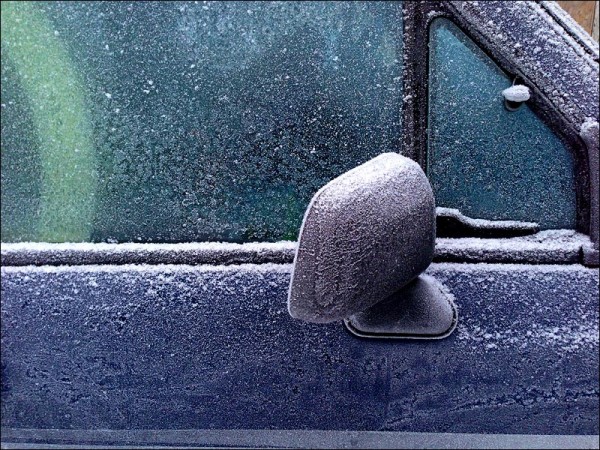 Continued from part five. Having wisely decided to move to a more secure location, the question now was where? The trail to town was submerged, and the security of the town itself was an open question. So south wasn’t looking good. North looked a lot more promising. The Chase trail is on the west ( downstream) side of the tracks/dam and was still dry north of the bridge. We decided to move just the short distance to the west side of the rail grade and make camp there. If things worsened, we would be in a good position to retreat north, even literally head for the hills if need be. Just a short move, but if we stayed at the cabin and the water got significantly higher, we would be cut off from the only good escape route.

So how hard can it be to move seven sled dogs a few hundred yards? For those of you who don’t know sled dogs, I will tell you – pretty hard. These guys are very very good at the things they do, like pulling sleds – and getting themselves into trouble. ?And they are very very bad at the things they don’t normally do, like swimming, coming when called, or behaving remotely like domesticated animals. And they were all of course very worked up – another one of their major skills. It took about an hour. Or was it two hours? Think rodeo. African wildlife documentary, stampeding wildebeasts. Mud wrestling. Rugby. My one lasting image is of Ajax, standing chin-deep in water in his wet black tuxedo, 10 feet from the correct shore, deciding he couldn’t do it, and heading back the 90 feet he had already come – while over his head sails “free willie” Ivory, on his sixth crossing as a dolphin-gazelle, screaming dog yahoos at the top of his considerable lungs.

We reached our destination, all hands accounted for and no blood. 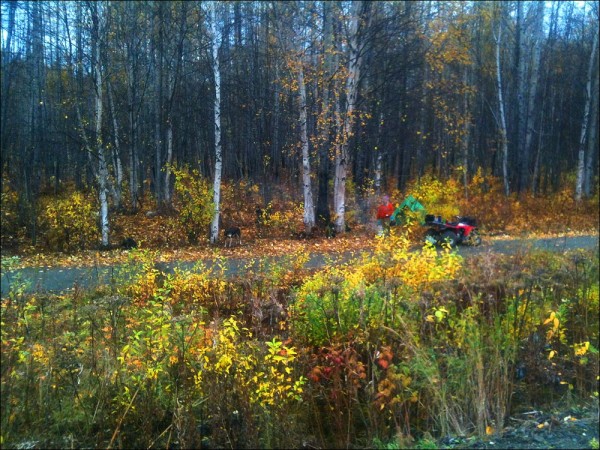 Six of the seven dogs can be seen in this photo of the west-side camp, if you look carefully. Click to enlarge. 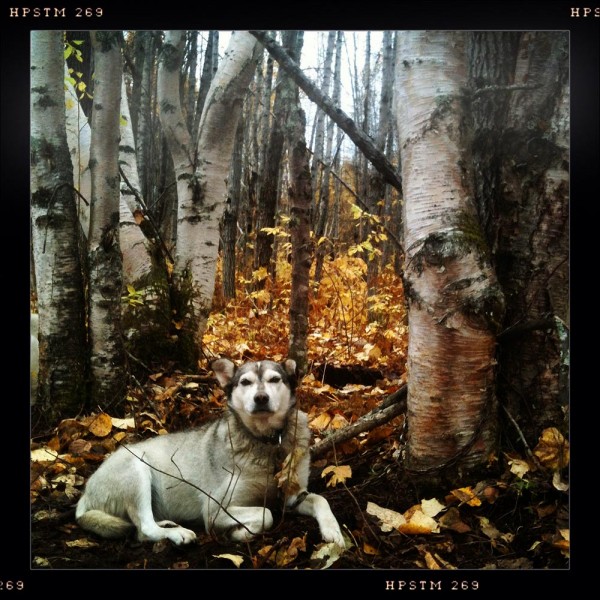 With the dogs all curled up in the woods, on nice fresh leaves actually better than their dogyards, a fire going, and darkness closing in, we settled down for the night. It was actually very nice. And if we had to, we could have been on the move in about ten minutes. The wheeler was parked facing north, gangline hooked to the front end , and harnesses already attached. It didn’t come to that, but we were ready.

Night passed with gentle rain, the roaring of the river in the darkness, and the odd absence of trains – the track had washed out at Gold Creek north of us. A fiery dawn revealed the river down just a bit, and hope that the crisis had peaked. 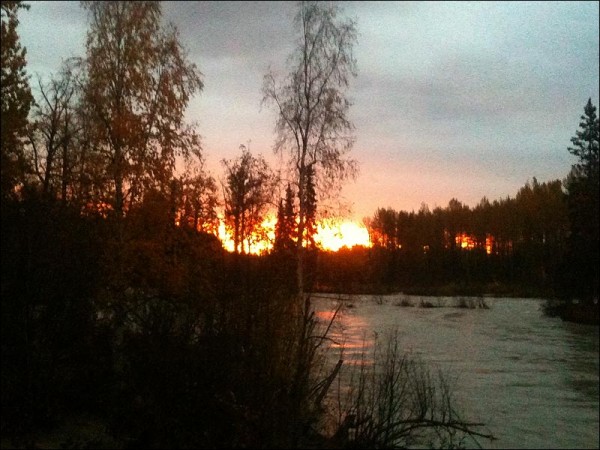 Dawn the morning after. Photo by Elf. 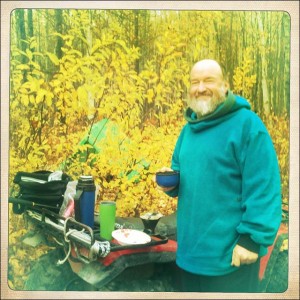 In our flight from the cabin, Annie had managed to pack exactly what we would need to spend a comfortable night and have some food, -and the all important coffee- in the morning. 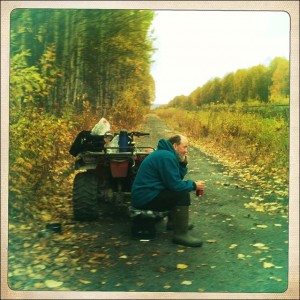 The still-charged phone links to the outside. Photo by Elf.

Over breakfast, I talked to family and friends on “the outside”, and reassured those who had last seen Annie headed INTO the flood that she was fine and taking pictures.

That turned out to indeed be the peak of the flood. For days the river remained at levels that would previously have seemed ominous and now felt strangely reassuring. And it slowly, slowly, went down, revealing a devastated and much-changed landscape. I will post some more pictures of that soon.

We went back to the cabin that day, all was well, and the dogs enjoyed their outing very much. In another day the Chase trail was navigable by wheeler, although I did pass a salmon swimming by me in the other lane on my way in to town.