Is there a meteorologist in the house? I find the behavior of thunderstorms in south central Alaska puzzling. It’s as if they are adapted to a northern climate, just like the animals. I grew up in New Jersey, and have spent time in many other parts of the lower 48, where thunderstorms occur. And they occur when it is hot. Like 85 or 90 or 100 degrees hot. Now around here, if a thunderstorm was waiting around for those temperatures, it would be waiting a long time. Apparently realizing this, they go ahead and happen at 60 or 70, figuring that’s as close as they are ever going to get. We had one today – thunder, lightning, hail, the whole works. Maximum recorded temperature: 72. If any of you reading this live in the southlands, when was the last time you got up in the morning, saw that is was heading to be over 70 degrees, and thought “Oh Boy, we’re in for a thunderstorm this afternoon”?

Also we never used to get thunderstorms. Ever. Even as recently as 20 years ago, there just weren’t any. Now we get them on a somewhat regular basis. I know this is due to climate change, but it still isn’t getting THAT warm. They must be adapting.

This afternoon, THE mountain was hidden by clouds, but the sky put on quite a show to compensate. 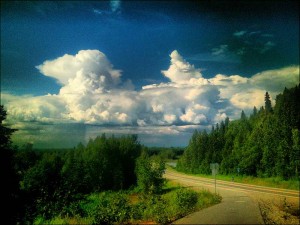 Even Denali is dwarfed by these cloudmountains. 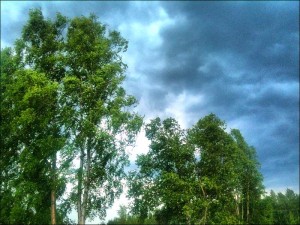 Birches turning their silver side in a rush of wind. It's coming!

The sky at slow boil over the airport.